How the Phallosan Forte Works

Phallosan Forte can be very effective, according to a German urological clinical study.

Non-erect length, when the penis extender is worn six hours a day for five days a week, was shown to increase by 3.6 cm or 1.41 inches. Erect stage growth was 1.14 inches.

Developed by highly trained physicians, 8 years of experience has gone into the first truly wearable penis extender.  The Phallosan Forte is designed to be allergen-free, comfortable to wear and offer stealth wear options.  Thousands of customer responses led to an improved Phallosan Forte system being developed.

Efficacy of Phallosan was proven in 2004, and the device has undergone numerous improvements that have led to enhanced comfort and better results. The extender follows the basic principle that the body will react when tissue is distended.

Continued distention leads to the body reproducing cells, lengthening and enlarging body parts as a result.

Gentle distension, over a long period of time, has been used by primitive people to extend their lips, earlobes and even their penis. Expanders are used when inserting a breast implant and skin grafting surgery follows a similar principle that overstretches the skin.

What Is The Secret?  Penile Traction + Time

The Phallosan works but applying gentle tension to the penis, over a long period of time, to force the penile tissue’s cells to reproduce. The user’s glans and foreskin will be enclosed inside of an airtight sleeve and in a protective cap.

The penis is secured with a stretch belt that will apply an even, pulling force to the penile tissues.

A six-month clinical trial showed that penile size is improved by:

The study includes three-month results, too, which indicate:

Six-month results were even more impressive:

Interestingly, minimum growth experienced at the three-month mark was 0.00 cm, but at the six-month mark, the minimum growth was 0.20 cm, demonstrating the benefits of long-term use versus short-term usage.

Penile length at the start of the study for an erect penis was 8.70 cm at the minimum, after the three-month mark, this erection length was 10.50 cm and 11 cm after six months. The mean, erect length increased from 12.30 cm to 13.40 cm after three months and 14.10 cm after six months.

Maximum erect lengths went from 15.50 cm to 16 cm and 16.5 cm during the third- and six-month measurement respectively.

Erection behavior of all participants were also logged with the following results:

Statistics from the study indicate that length of wear correlates to better erection behavior, with 50%+ of patients claiming that their erection quality increased after six months.

In terms of erection duration, the majority of patients (75%) claim that duration stayed the same, yet 25% claimed an improvement in the duration that they’re able to maintain an erection.

A person that is using the Phallosan Forte may be able to help combat erectile dysfunction.

Erection hardness was improved in 50% of participants.

Ejaculation time, an interesting statistic for anyone that has premature ejaculation, was improved on over 20% of participants. The participants claim they were able to extend the time before ejaculation occurred.  While their is some amount of trust involved in this metric, it is worth further investigation as this could open an entire new segment of potential users.

Sensitivity was improved in 41.7% of participants, with 54.2% stating that their sensitivity remained unchanged. One patient did note that they had less overall sensitivity. Libido was increased in 45.8% of patients.  This is another important measure of use for this type of device that we initially did not consider.  The boost in confidence from the size increase led to a stronger desire.

Satisfaction, a statistic that is related directly to Phallosan rather than sex, was impressive. Over 91% of patients, all of which used the device for a six-month period or longer, claimed that they were satisfied with the results and Phallosan Forte system as a whole.

Phallosan may be used as a primary treatment for penile hypoplasia.

Penile girth, or thickness, is also increased up to 10%, while penile curvature can be corrected over the long-term with extended wear. 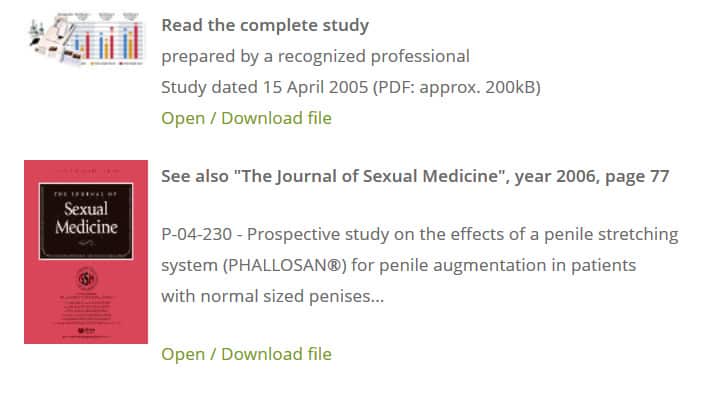 Phallosan Forte provides the best results when worn up to the six-month period or longer. Results for some users are experienced within the first three months of usage, but the cell replication needs to take place over the long-term.

As the best penile traction device on the market, the Phallosan Forte offers several comfort advantages over rod based devices:

Positive force creation will change depending on the user’s settings, from 0.88 pounds up to 6.61+ pounds.

Designed with medical-grade materials and 18 years of refinement, the Phallosan does require different usage when first starting to use the device.

A lot of other reviews will recommend wearing the device for longer, and it can be worn up to 10 hours per day. But keep in mind that the clinical studies that we mentioned extensively in the beginning of the article had a wear schedule of:

Some users will start to increase time and the amount of days that the extender is worn. It is recommended that you follow the same schedule that is found in the clinical studies.

Note: Results will start to be experienced within the first three months, but the majority of the results experienced in the studies occurred between month 3 and 6.

Day and night wear are possible. The Phallosan is discreet and can be worn all day without being noticeable to the wearer. The device’s protector cap, designed with ultra-soft silicone, allows for extender wear without pain or discomfort.  This stealth mode was our favorite feature.

Studies show that there are no side effects when the wear instructions are followed.

Wear to the left or right of the groin is possible, and all materials are allergen-free to eliminate the risk of an allergic reaction occurring. An internal suction pump and tension gauge will allow for precision tuning of the extender.

The device is invisible beneath cloth, so it can be worn to work or outside without fear of exposure. Patented internationally, the device does not use metal telescopes and has no risk of strangulation of the penis.

Where to Buy the Phallosan 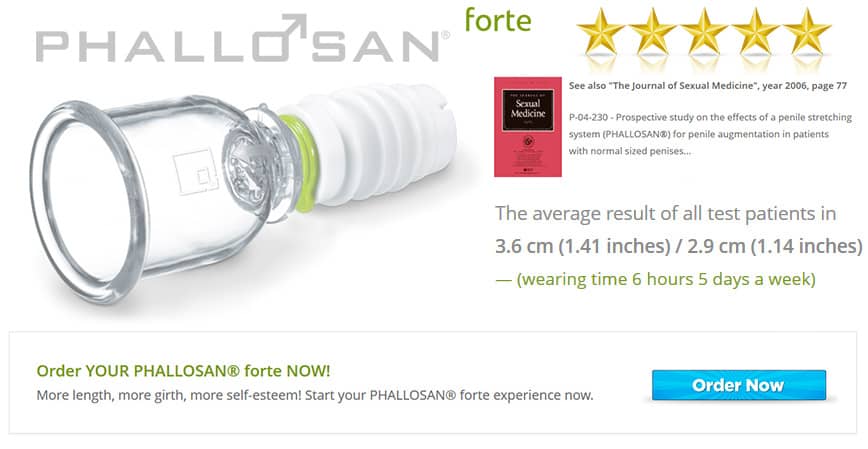 Direct from manufacturer purchase is recommended to avoid knock offs and enjoy extra perks of ordering from the manufacturer. Delivery is within 2 working days in Europe, and an additional four sleeve condoms are included ($100 in savings).

Products are boxed in plain packaging with no indication that the buyer has purchased a penis extender.

Returns are accepted within two weeks of the receipt of merchandise.

A 2-year warranty protects your investment from defects or premature breaks under normal wear.   After 2 decades of extensive research in penile enlargement, we can say without a doubt this is the best option for men to increase their length and girth comfortably.