Welcome to the sixth edition of “The Definitive Penis Size Survey“.

For those new to this site, the discussion below pertains to the results of the most exhaustive penis size survey conducted to date. Questions concerning everything from actual penis dimensions to the possible correlation between size and other parts of the body, to “owner” satisfaction have been asked in a serious attempt to dissect penis fact from “phallic fallacy”. With a combined adolescent/adult sample size in excess of 3,100 subjects, a high degree of statistical precision has been achieved. In order to expedite the writing process of this communication, I have followed the same format of previous editions. A number of topics, however, are covered in slightly greater depth than before and I have introduced three new graphics.

BEFORE WE BEGIN
In a number of the analyses that follow, penis size has been classified according to the subject’s perceived endowment status (ref. question 43 of the questionnaire). The dimensions of this “self ranked endowment status” are summarized in the table below.
MEAN VALUES OF SELF-RANKED ENDOWMENT STATUS
With the exception of “Penis Size and Age” and “On Circumcision, the analyses discussed below pertain to adult subjects, 18 years of age and older. The inclusion of minimal, and particularly maximal penile dimensions have caused many of you to question the validity of my data. Blatantly fraudulent responses (from 17 year old lawyers or those claiming “American Zulu warrior” ancestry, for example) are excluded from entry into the database as are penis lengths in excess of 360mm (14.2″). As an additional safeguard, the bottom 1% (for those 18 years and older) and top 2% (for all age groups) of each of the five penile measurements studied have also been excluded from the analysis. I realize that this is a rather conservative approach, but the fact that my results are very close to that reported by Kinsey et al. and the almost symmetric distribution of erect penis lengths, leads me to suspect that any residual and unavoidable contamination has been kept to a minimum.

Figure 3 illustrates the bell-shaped distribution of erect penis lengths, thereby justifying the use of the parametric statistical tests that follow.

Although it was not part of my original analysis, a number of you have asked whether gay or bisexual men are more endowed than straight men.

As we can see from figure 4, there was no statistical difference in erect penis length amongst the three groups.

To determine more precisely how you compare with the 2,545 adult subjects who participated in this survey, I have divided the data into percentiles of 10 percentile increments. If, for example, your erect penis measures 155 mm, the table below indicates that this size falls between the 40th and 50th percentile. In other words, at least 40% of the men fell below this value and at least 50% were above. In the upcoming expanded version of this edition, the chart below has been replaced by three graphs which provide an even greater degree of precision.

Since the release of the fifth edition, the number of Black and Hispanic participants has not substantially increased. Because of the continued low sample sizes therefore, the results reported below concerning the aforementioned groups must be considered tentative, pending a larger number of responses. Surprisingly, it would appear from Figure 5, that contrary to popular myth, Black males have shorter erect lengths than their Caucasian counterparts. However, due to the small sample size and large variation in lengths, this “difference” is not statistically significant. The average flaccid length among African americans however was 93.8mm (3.7″) compared to 87.7mm (3.4″) for Caucasians, which may be responsible for the impression that Black men have greater erect dimensions.

Again, I emphasize that these observations must remain tentative.

There was a significant difference in length between Caucasians and both Hispanic and Asians (East Asians to be exact, those of Chinese, Japanese,Korean or Vietnamese descent). Whereas with Hispanics, such a difference was limited to erect length only, with East Asians all five measurements were statistically lower in comparison to Caucasians. Although part of this difference may be due to the shorter stature of East Asians (see “On Correlations below), height matched comparisons with Caucasian subjects nevertheless failed to alter this finding. The figure to the above  summarizes the results of question 44, in which men were asked to rate members of their own ethnic group with respect to size. Of particular interest was the response of Asian subjects. Among Asians residing in the East, 31% felt that they were generally of modest size, compared to 56% of those living in the West. This is probably due to the fact that Western countries tend to be more racially diverse, allowing for greater interaction and hence comparison with men of different ethnic backgrounds. It is also interesting to note that the vast majority of Black subjects stated that they tended to be well endowed; an opinion which was not borne out by the results of this study but has been widely accepted.

I was initially surprised by the number of responses from teenagers and, although my survey wasn’t specifically designed to detect changes in penis size during puberty, the data collected so far has revealed some rather interesting findings. As of this edition, and as illustrated in Figure 7, average erect penis length increased until the age of 16, a finding that marks a departure from the five previous editions of this page, which reported that such a developmental milestone occurred at age 17. With respect to adolescent lengths, it is interesting to note that the results presented here are almost identical to that of another online survey, the results of which used to be located at http://www.dnai.com/ but have been removed recently.

The apparent variation in average size between the ages of 16 to 49 was due to random sampling error and was not statistically significant..

The situation with regard to erect penis length beyond the age of 50 remains somewhat nebulous. According to the graph below, there was essentially no difference in size with respect to younger age groups. However, I have detected a progressive, yet slight decline in length among older men in this group. Unfortunately, due to the modest sample size of such individuals, it was not possible to determine whether this was a statistical anomaly or an anatomical consequence of the aging process.

The data indicates that during an erection, the average increase in penis size was 197.9%.

However, for men whose flaccid penis measured 80 mm (3.1″) or less, the increase was 263.2%, compared to 165.3% for those greater than this length (p<0.0001). This principle is demonstrated in Figure 8, which reveals a strong negative correlation between flaccid length and the percent increase during an erection. This backs up grower versus shower studies. It is also interesting to note that there was less variation in erect penis lengths relative to flaccid lengths. This convergence in penis size is illustrated by comparing the coefficient of variation (CV), a unitless measure of variability obtained by dividing the standard deviation by the mean and expressing the result as a percentage. The CV for flaccid lengths was 31.4 whereas in the erect state it decreased to 19.5. When erect the position of greatest girth was as follows; head 36%, uniform 32%, base 25% and some other location 7%. Forty eight per cent stated that their penis was straight when erect, 28% reported a deviation to the left or right and 24% claimed to have a bend (presumably in the shaft).

Unlike a previously published study in the medical literature, I did not detect a significant difference in erect length (or the other four measurements) between circumcised and uncircumcised individuals. Overall, 70% of the subjects were circumcised, 27% were uncircumcised and 3% did not specify their circumcision status. Of the 633 men responding outside of the U.S.A. and Canada who specified their status, 64% were uncircumcised. Not unexpectedly, this compares to 40% of Canadians and only 15% of Americans. The proportion of those claiming to be content, neutral or discontent concerning their circumcision status was almost equal between the two groups (approximately 66%, 21% and 13% respectively). Among those who were content however, there was a striking difference with regard to sexual orientation. Seventy-two per cent of circumcised straight males expressed contentment with their circumcision status while only 58% of circumcised gay or bisexuals felt the same way (p<0.001).

With the rather impressive number of responses I have amassed since the inception of this survey in 1996, I have detected that, on average, there exists a strong relationship between erect penis length and height, as illustrated in Figure 9. For the purposes of demonstrating possible correlations between length and various hand and foot measurements, it became necessary to control for this phenomena by performing a partial correlation between length and the various measurements in question. The results of such an analysis are presented below.
With the exception of shoe size, there exists a significant but weak correlation for each of the body parts studied.
(Please note that questions regarding nose length and width are recent additions to the survey, and at the time of this writing I had insufficient data to perform a reliable statistical analysis.)
Figure 10 above reveals the significant relationship between erect length and girth.

The following discussion pertains to Section E of the survey which attempts to assess the degree of accuracy by which penis size is estimated. As shown in the figure below, subjects A and B were significantly over or underestimated respectively. Although subject A is of modest endowment in terms of length, his circumference is average, and this may have contributed to the overestimation. Subject B’s flaccid length was correctly estimated to be 124mm (4.9″), but his predicted erect length, like that of subject A in Set 1, was underestimated.

This provides further support that assessing a person’s endowment status based solely on the basis of flaccid size is highly unreliable.

As in all other sets, estimates were found to be independent of age, sexual orientation, number of male sexual partners, self ranked endowment status or contentment status.

As illustrated in figure 11, well endowed men had more sexual partners per year than their average or modestly endowed counterparts. The data reveals that these men were more self-confident which may, in part, explain this finding. As illustrated in figure 12, a striking difference existed in the response pattern between gay/bisexual men and straight men when these individuals viewed a well endowed male (ref. survey question 47). Gay and bisexual men tended more to express arousal (36%) or awe (28%), while straight men were more likely to be indifferent (29%) or envious (21%). Among both groups, those who were indifferent had significantly larger erect penises than those who felt either intimidation or inadequacy (p<0.001).

After a multiple year hiatus, we are back in 2018 and will begin to accept new submissions for our  “The Definitive Penis Size Survey” soon.

THE ONE AND ONLY LINK(S)!
If you, like many other readers of this page, are curious about the effectiveness of penis pumps and other enlargement techniques, you may be interested in visiting this highly informative site. It covers a legit medical study from Germany and the device is non-invasive.  We use it during the normal work day and it is not detectable.  The best part is we got real gains in both width and length. If you don’t find what you are looking for, we will soon be discussing other options! 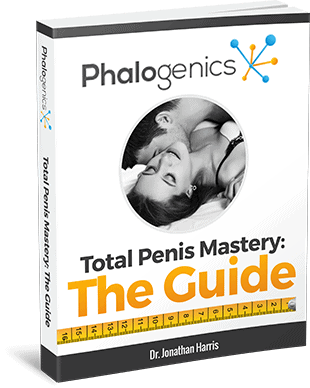